As soon as you look at or hold a sand whiting, you can tell that you’re dealing with a quality fish. Their slender profile and somewhat diminutive size belie the fact that they are an outstanding sportfish, and are capable of putting up a spirited tussle on the end of a line.

A handsome fish, the whiting is more often than not seen only as a fleeting glimpse as they dart across shallow estuary sand flats. Their scales gleam in the sunlight like blobs of molten white gold. It’s easy to see why this species invites comparison with prized northern species like bonefish, and inspires such passion amongst those that would make it their quarry.

Sand whiting would have to be one of the most highly prized table fish in the country, and in recent years their sport fishing potential has been more fully realised with the development of surface fishing techniques.

They have a wide range – from Cape York, down the entire Queensland and New South Wales coastlines, into Victoria and they’re even found in small numbers along the east coast of Tasmania.

The biggest concentrations of sand whiting are found in southern Queensland (where they are often referred to as summer whiting) and in northern New South Wales, where they can generally be caught year-round in shallow bays, estuaries and rivers, as well as in the surf. 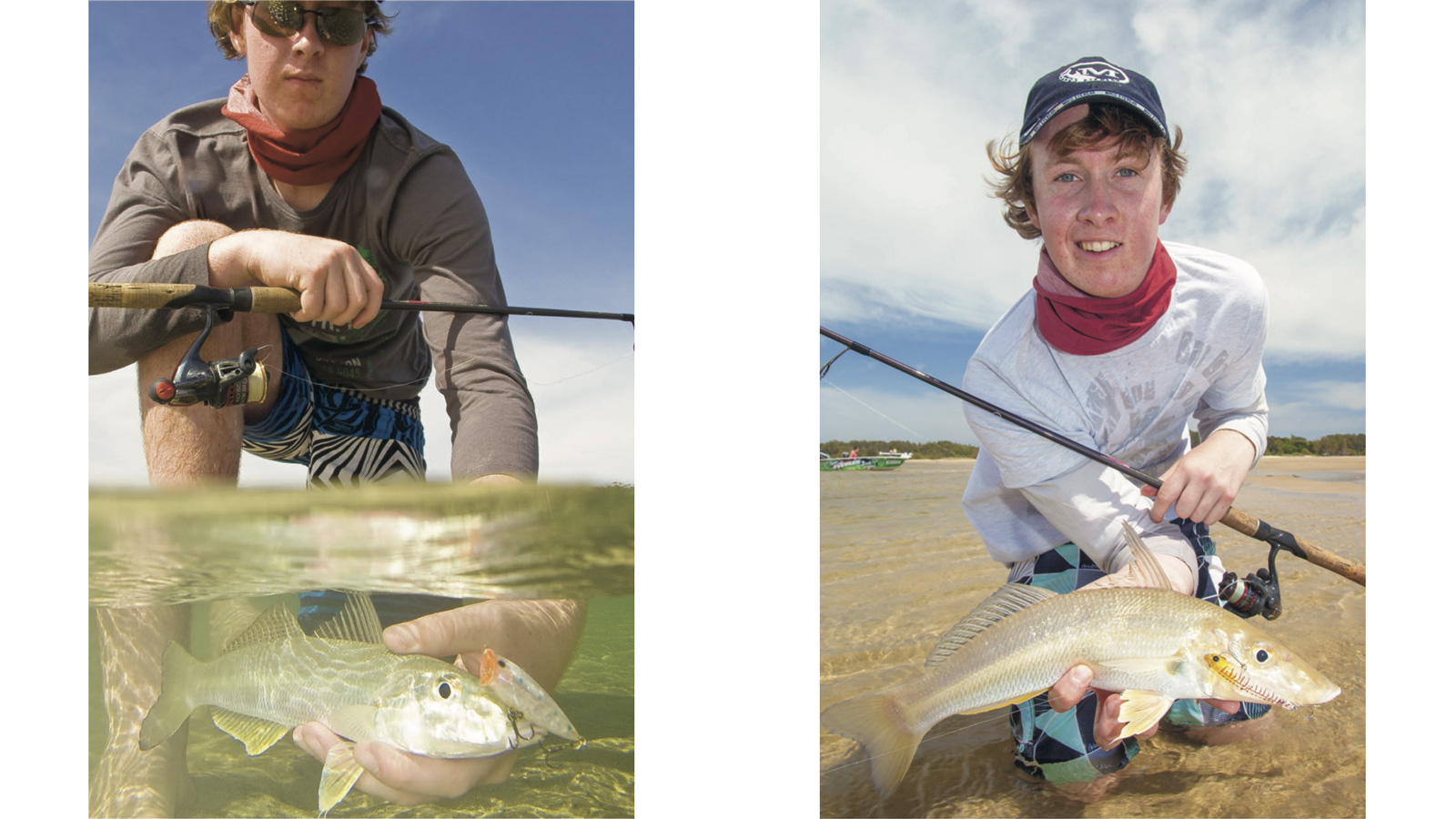 Techniques
As they have traditionally been viewed primarily as a food fish, whiting were once solely targeted on bait, and this is still a very popular and effective method. Their diet is predominantly made up of beach worms, molluscs such as pippis and small crustaceans such as saltwater nippers. When targeting them on bait, the best results come from using the above-mentioned species for bait. Fresh caught beach worms, pippis and nippers will often result in a good catch.

Due to the shallow, sandy areas they inhabit, whiting can be targeted on very light gear, with minimal risk of losing fish to gear failure. Braid or monofilament mainline of around 8lb is about right. Add a fluorocarbon leader of about 8lb, and a size 4 or 6 long shank hook on a running sinker rig and you are ready to go. Use the lightest sinker that you can manage in the conditions – this can mean fishing unweighted in shallow estuaries, adding a pea-sized ball sinker in light surf, and a larger ball sinker around the size of a marble in heavier surf.

Whiting were first targeted with surface lures on the estuarine sand flats of the south coast of New South Wales more than a decade ago. The technique of catching whiting on tiny poppers and stickbaits is widely attributed to pioneering south coast angler and fishing guide Kev Gleed.

Although the whiting’s distinctive body shape and mouth placement show a clear adaptation to bottom feeding, it was noted that a portion of the whiting’s diet in shallow estuaries was made up of school prawns, which flick along the surface. When targeting whiting on surface lures, you are trying to imitate a fleeing prawn with your popper or stickbait.

It’s worth noting that as you’re trying to specifically imitate a particular bait source with this style of fishing, its presence can really make or break a session. If there are no prawns present in an estuary, the whiting will generally not respond to surface lures. As prawns run through most southern estuaries during the summer months, with particular concentrations active around the new moon, these are the most effective times to target whiting on the top water.

When working a surface lure for whiting, keep in mind the fact that you are trying to imitate a fleeing prawn. Choose a lure size and colour that fits this description, and attempt to mimic the skittish, darting action of a prawn as best you can. Focus your attention over weed beds in shallow water, and make sure to keep your lure flicking along constantly. Whiting will most actively hunt a prawn that they think is going to escape, so keep it flicking along quickly and work it all the way back to the rod. 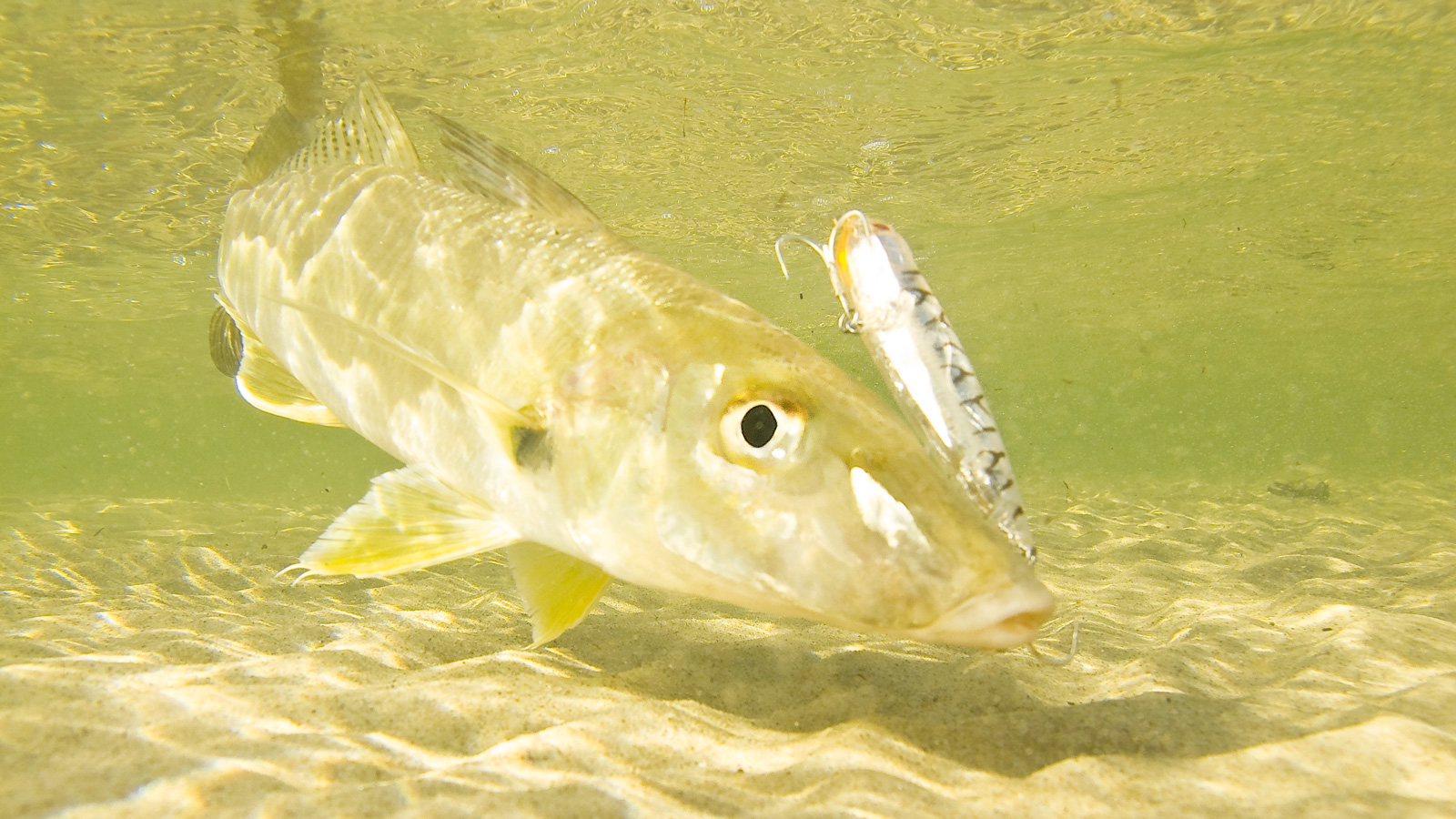 Gearing Up
Whiting can be effectively targeted on very light gear. Long rods facilitate long casts, which can be helpful when the fish are feeding hesitantly. I find that a 2-4kg 7’ rod, matched to a 1000 size threadline reel loaded with 4lb braid is an effective combo that can be comfortably cast for hours at a time. Some anglers find that they get less wind knots with a slightly larger 2500 size reel, it just comes down to personal preference.

When targeting surface feeding whiting, arm yourself with an array of poppers and stickbaits around 50mm in length in clear and natural colours. Some anglers have had increased success on larger whiting when using larger lures around 70mm in length. A few of the most popular lures are the Bassday Sugapen, the Lucky Craft NW Pencil and Kaj Busch’s Stiffy popper.

Very small sharp treble hooks are necessary for this style of fishing. Good quality lures such as those mentioned above will come fitted with appropriate hardware, but some of the cheaper lures on the market should be retrofited with quality Gamakatsu or Owner trebles. 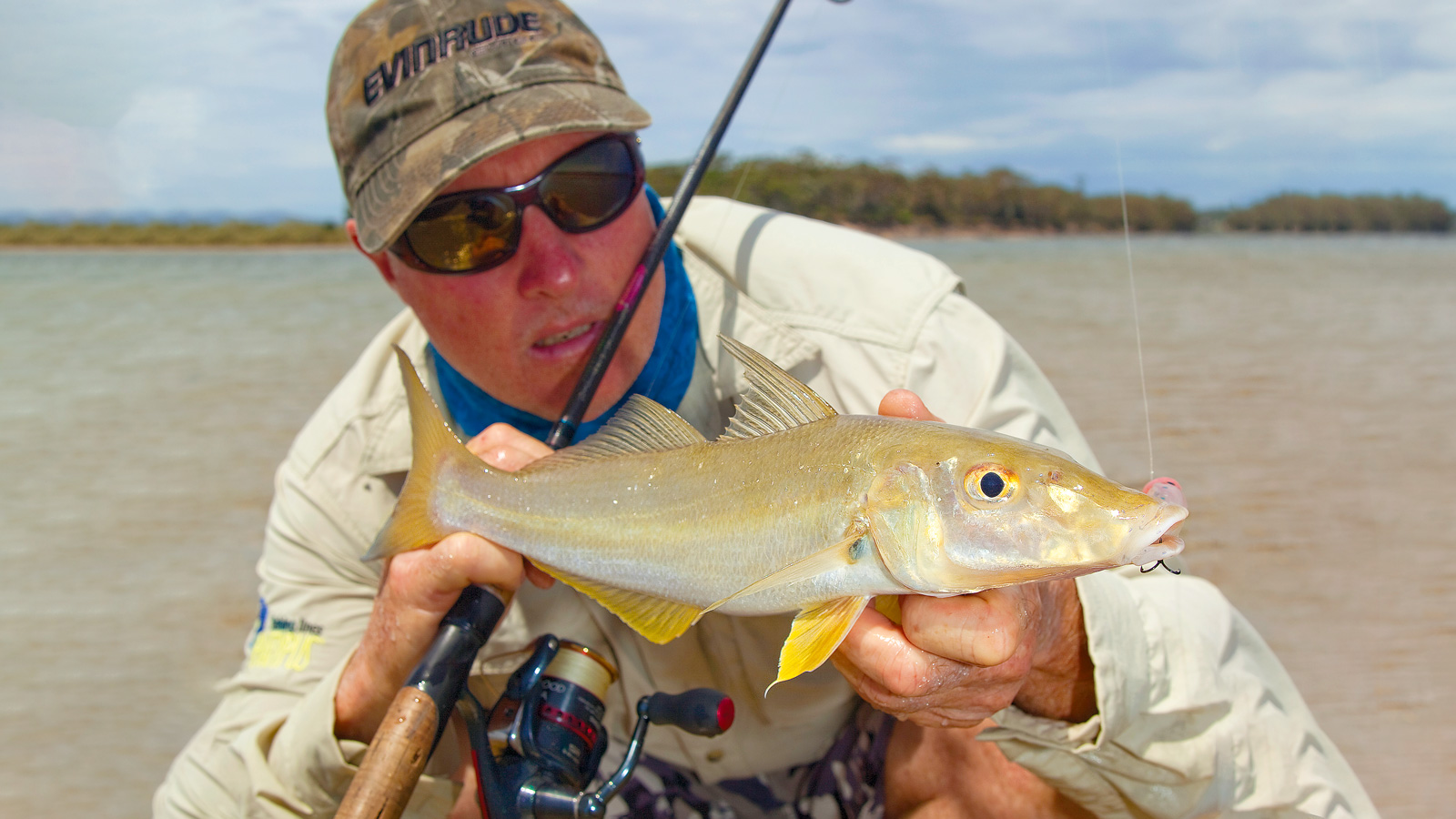 Keeping a Feed
Whiting are an outstanding table fish, and as such there is quite a heavy amount of pressure exerted on their stocks due to both commercial and recreational fishing. That said, there’s nothing wrong with keeping a couple for a feed.

Most anglers wouldn’t consider keeping half that many fish in a single session, but there’s nothing better than a couple of fresh whiting fillets pan-fried in olive oil with a bit of cracked pepper and served with a squeeze of lemon.