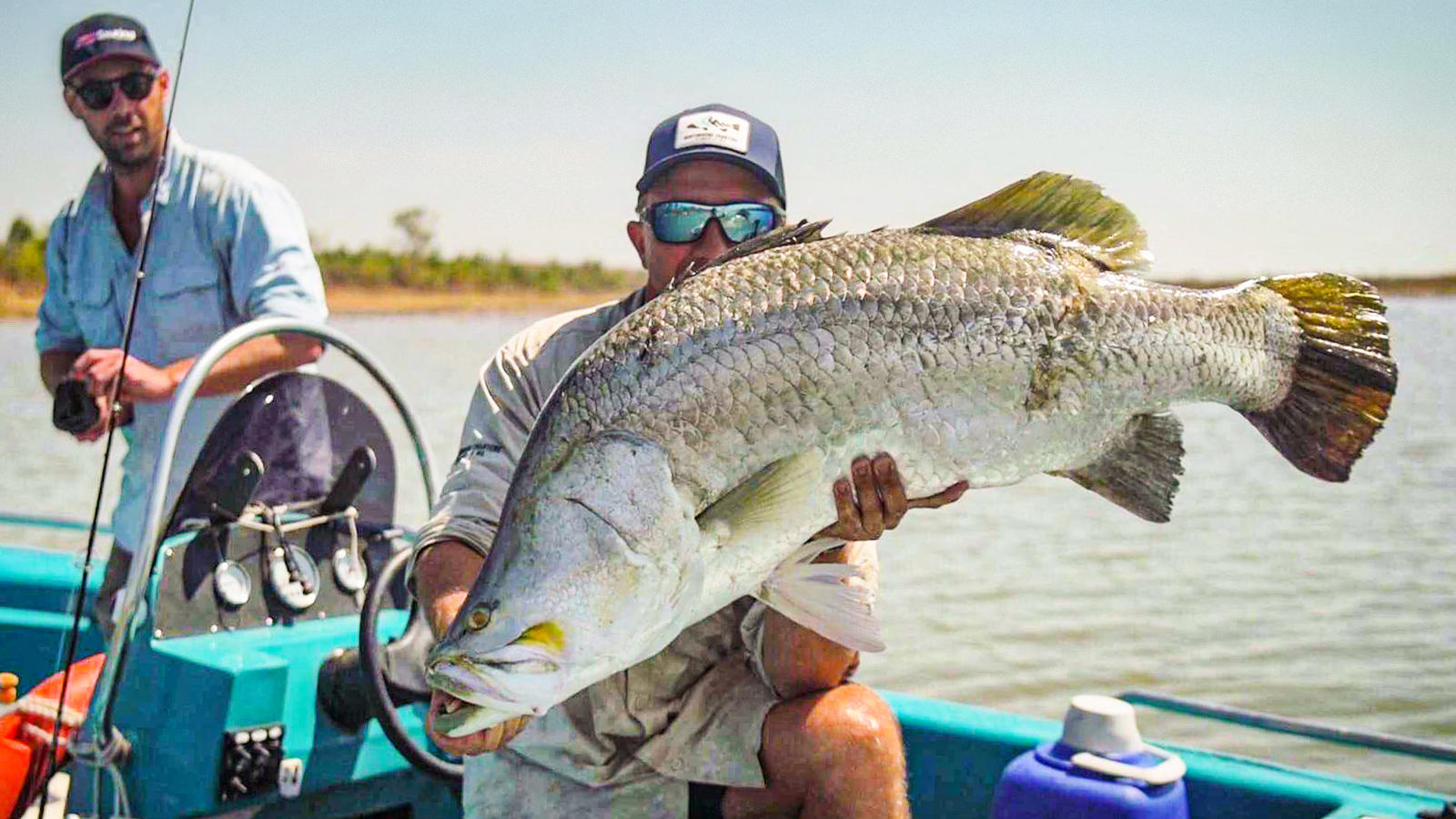 Freshwater sportfishing in the Top End.

There’s something serendipitous about wandering the banks of a freshwater creek or billabong in the Australian tropics, firing off casts at likely looking snags and pools as the cicadas roar above you and the sweat drips from your brow.

Luring native freshwater species is one of the most fascinating and fulfilling styles of fishing that can be undertaken anywhere, and the best news for travelling anglers is that the skills, gear and techniques used to target southern natives are very much transferable when you find yourself fishing unfamiliar waters in the deep north.

The inland rivers, creeks and billabongs of Cape York and the Gulf Country, the Northern Territory and the Kimberley play host to some of the best freshwater fishing you’re likely to encounter anywhere. The terrain’s different to down south, but the tactics remain much the same. The target species grow a little bigger than most southern freshwater targets, and there are a range of other factors to contend with, not limited to extreme heat and an array of unwelcoming critters to be wary of, but you can’t let little obstacles like that stop you from experiencing the best fishing of your life! 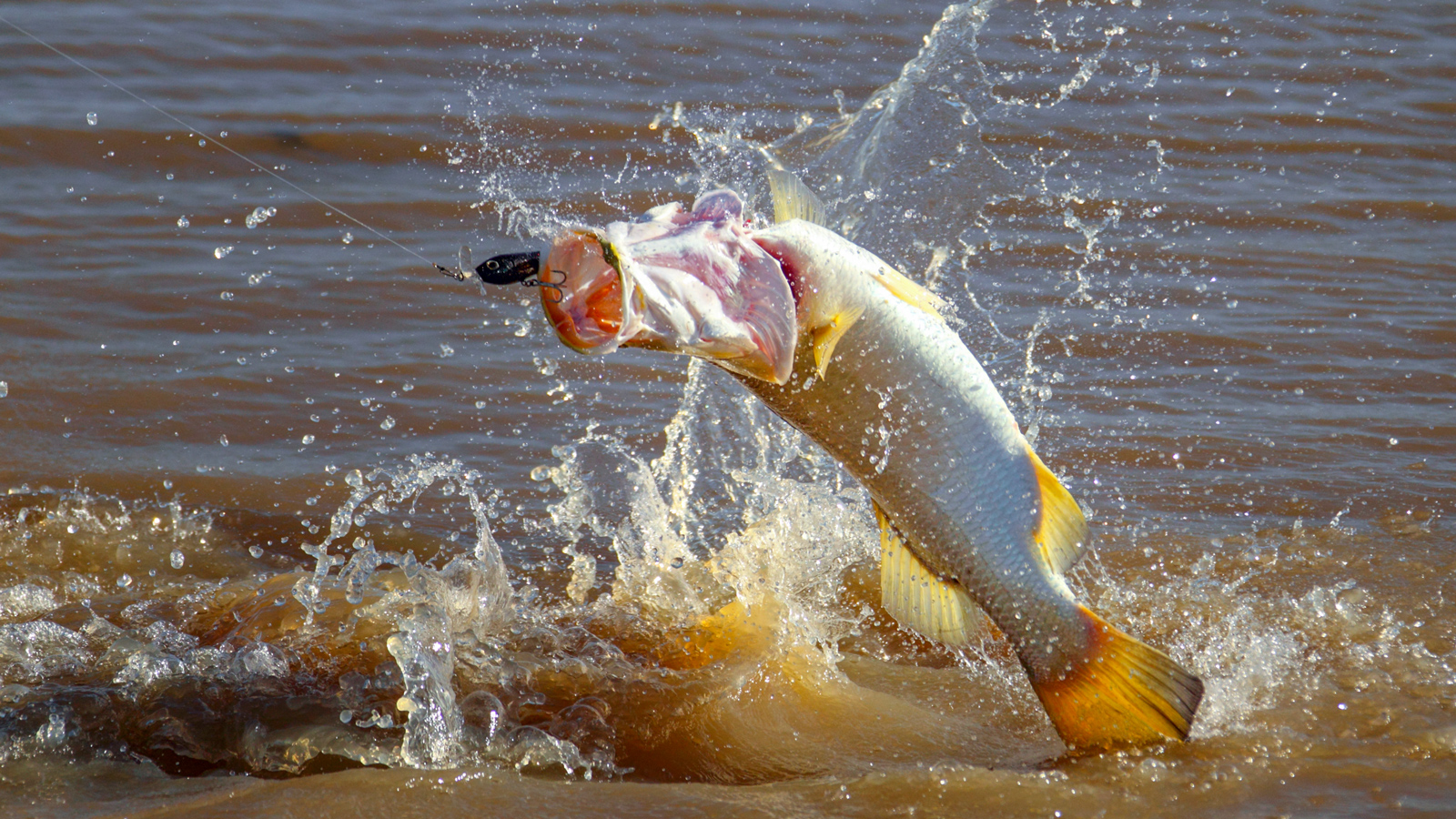 Target Species
A lot of southern fishos visiting the Top End seem to experience extreme tunnel vision when there’s a possibility of tangling with barramundi. An understandable affliction, as the mighty barra is undoubtedly one of the most worthy opponents you could test your angling ability against.

The barramundi has it all, really. They grow to huge sizes well over a metre in length, are quite prolific, will readily hit a range of lures, flies, live and dead baits, often take to the air multiple times throughout a fight, and if you do choose to keep one occasionally, they are also fantastic eating. Plenty to love, right?

Well, on top of the ever-popular barramundi, there are quite a few other species found in freshwater waterways throughout the tropics that are certainly worth targeting. The northern saratoga is a popular target in far north Queensland and Northern Territory waters, and the sooty grunter is another favourite for anglers in north Queensland.

The saratoga is a prehistoric looking fish that’s found in freshwater creeks and billabongs fringing the Gulf of Carpentaria.

‘Togas are known for their willingness to smash surface lures and flies and the fantastic aerial fights they put on. They only grow to around 55cm in length, so can be successfully targeted on fairly light tackle.

The sooty grunter is found in freshwater systems up the top of Queensland and is the most well known member of the grunter family. Sooties grow to similar proportions to Australian bass, so any fish over about 30cm in length is a good fish, while a 50cm version is the fish you dream about. 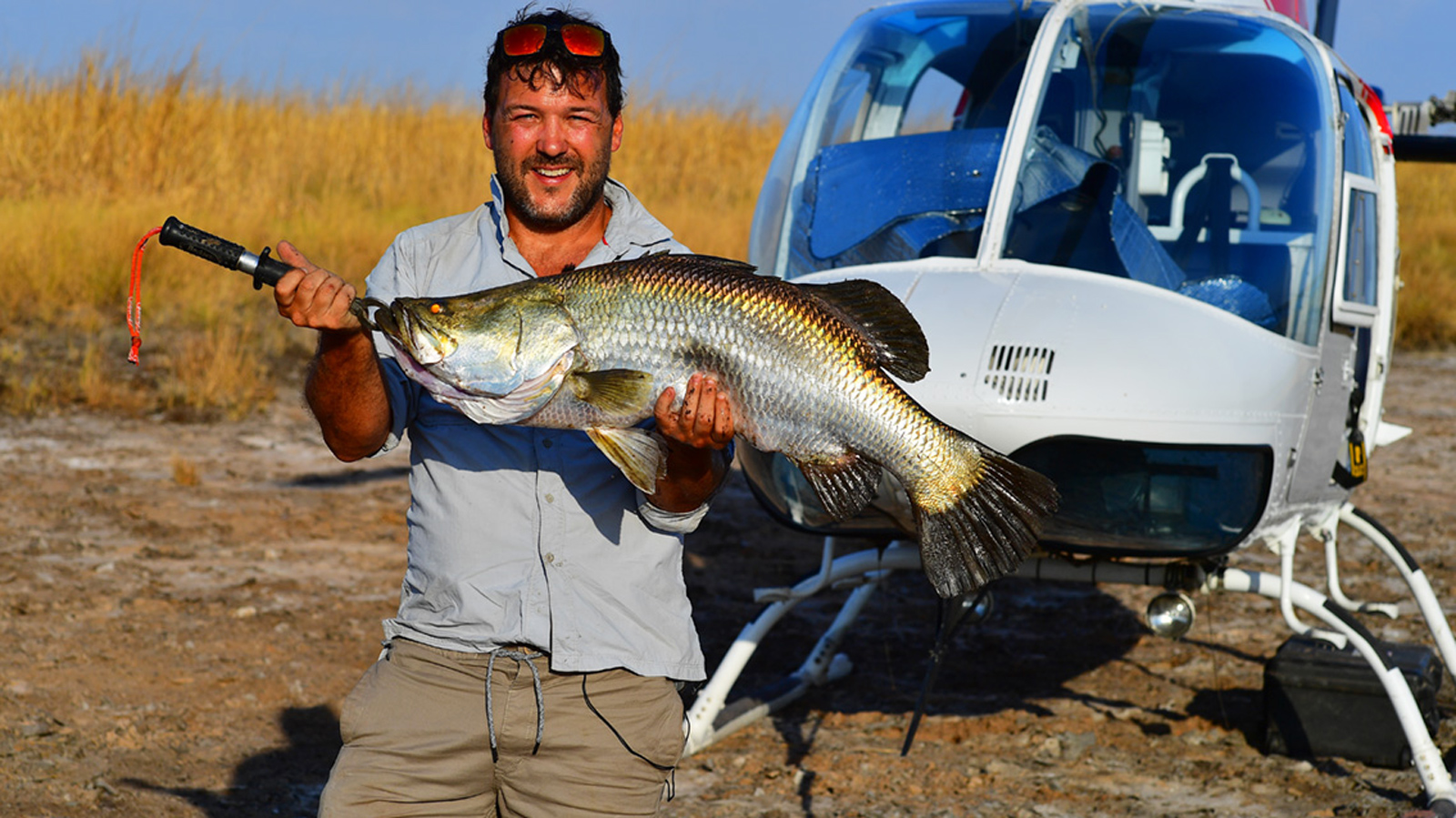 Tactics
If you’ve got any experience at all targeting native freshwater or estuarine species like bass, estuary perch, yellowbelly, Murray cod or silver perch in other parts of the country, you should have no trouble at all adapting to catching their tropical relatives up north.

Just about all freshwater natives have a natural propensity to seek out cover in the form of snags or other structure, and will attempt to hide out of the current in ambush, rather than actively hunt throughout the main body of the waterway.

Barramundi will hide beneath fallen or hanging timber, and can also be found around submerged boulders or rock bars. Saratoga can be found taking cover under lily pads on the surface of tropical freshwater billabongs – you can see by the positioning of their eyes on the top of their heads that they spend a lot of time poised just beneath the surface waiting for a falling insect or frog to come within range.

Sooty grunter will most often be found lurking on the edge of deeper pools near where they flow into shallower runs. If you can find some sort of structure such as fallen timber or submerged boulders around the edges of a deep pool, then you should have no trouble finding fish.

Knowing where your target species likes to take cover is the most important aspect of your approach. Once you know the sort of spots to focus your casts, it shouldn’t take long to land a fish or two, and the more you catch the easier it becomes. Approach a likely-looking spot as silently as possible and work on the accuracy of your casts. More often than not any strikes will occur on the first or second cast at a snag, so it’s important to make sure you’re landing your casts within 30cm of your target. 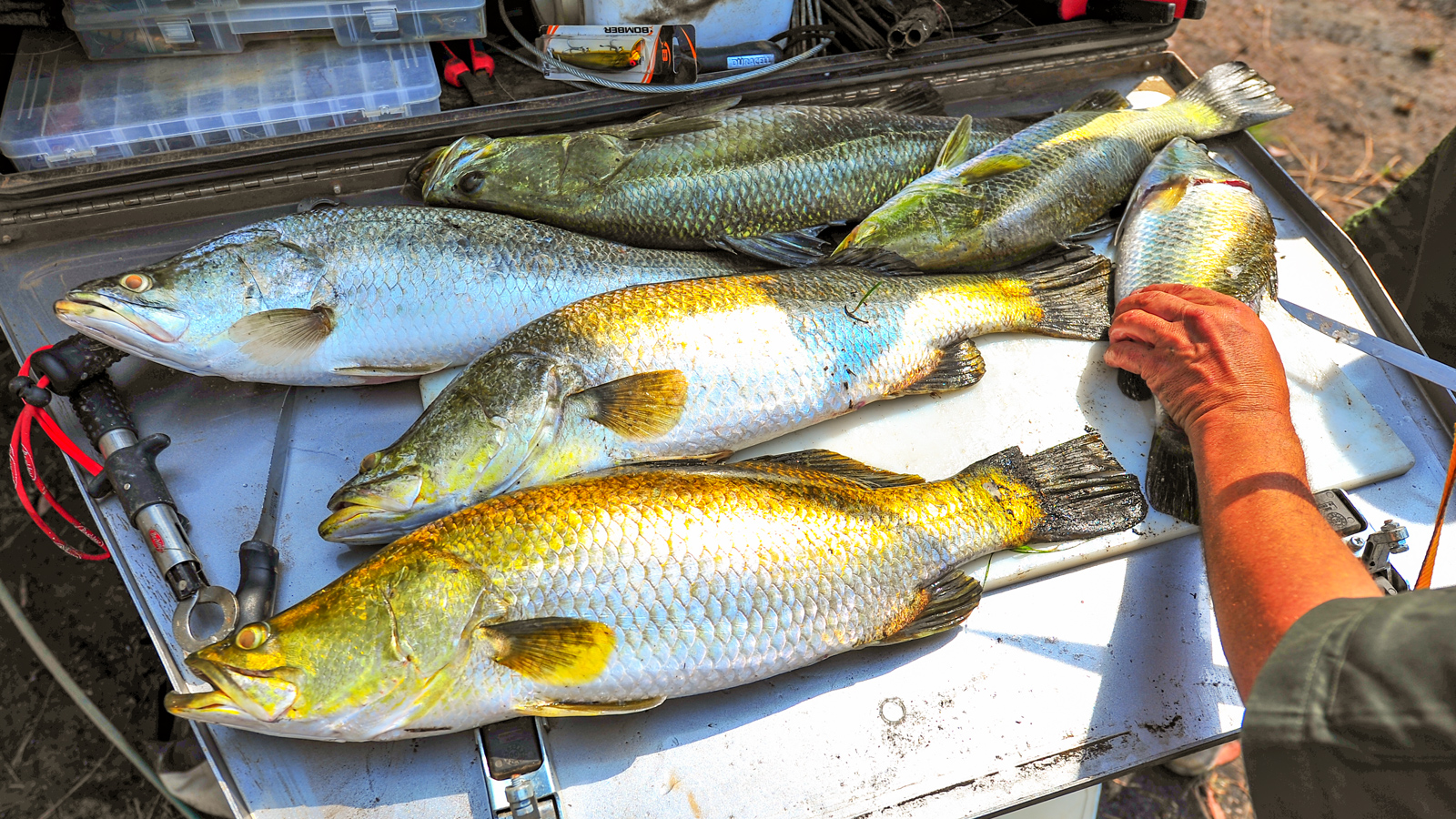 Gearing Up
The gear you use when targeting freshwater natives will vary to some degree depending on where you’re fishing. When specifically targeting either saratoga or grunter, you can get away with using light tackle, as both species rarely grow above 50cm, and are fairly clean fighters.

In open, sandy waterways you can use similar tackle to what you would use to target bass in southern waters: 6-7’ graphite rods rated to 2-4kg matched with either baitcaster or threadline reels loaded with 8-10lb braid is about right.

You’ll want to use at least a rod’s length of tougher fluorocarbon leader to protect against bust offs. In forgiving sand-bottomed waterways you will be able to use fairly light 15-20lb leader material, but if you’re fishing amongst heavy snags or there’s a possibility of hooking barramundi, it pays to go up to 30-40lb traces.

When specifically targeting barramundi it certainly pays to beef up your tackle. Even little barra are able to pull off plenty of line under heavy drag pressures, so a good starting point when targeting smaller barra would be 20lb braid and 40lb leaders. 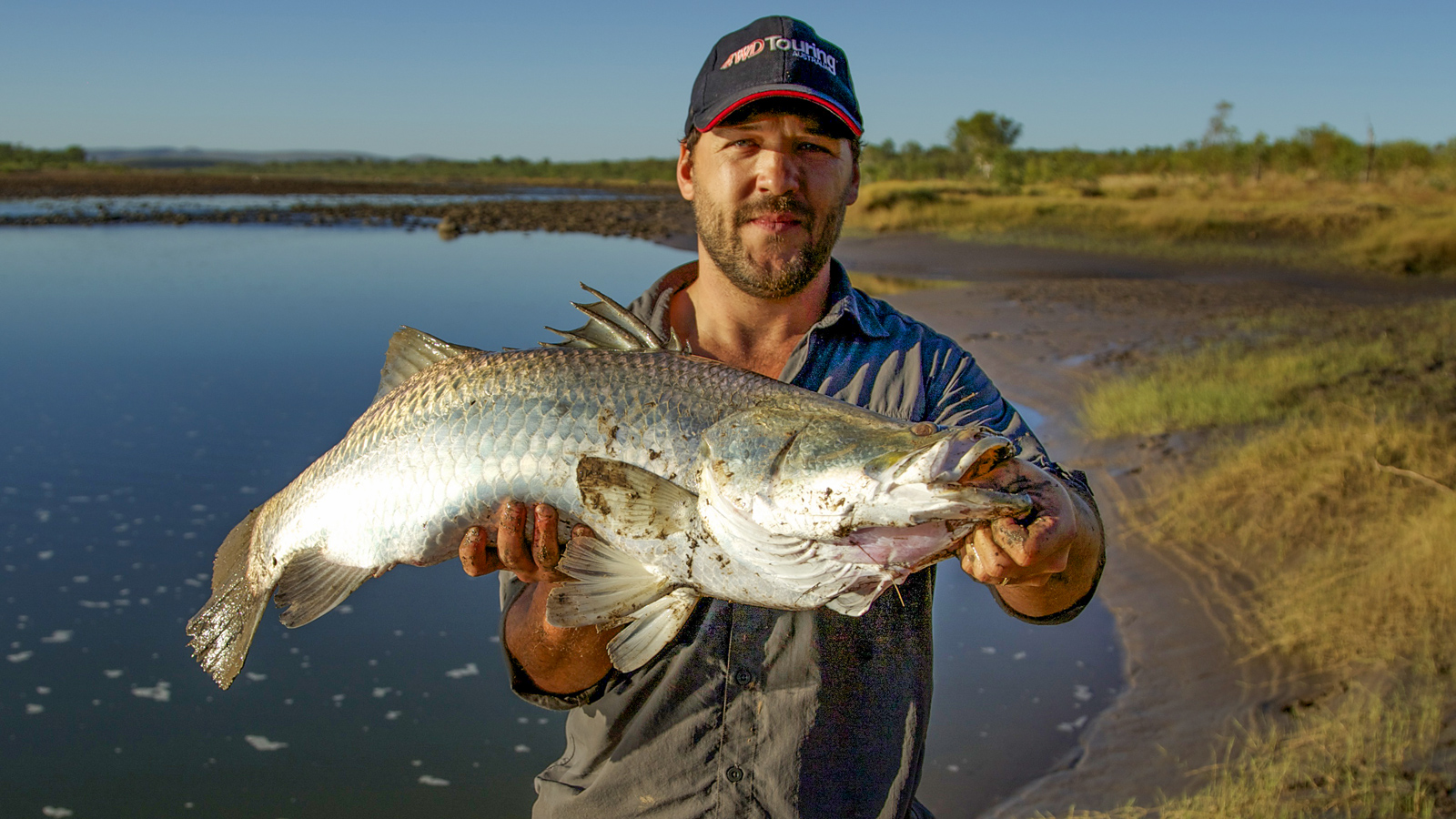 Lures
Artificial lures are the way to go when targeting freshwater natives up north. All of the above species will happily scoff a massive range of diving and suspending minnows, soft plastics, stickbaits, poppers and other surface lures. When targeting barra it’s a good idea to keep a selection of lure styles on hand so that you can figure out what’s working well on the day.

I’ve had good success catching barra from unfamiliar waters when fishing medium length sinking and suspending Sebile brand stickbaits, as well as on popular diving minnows such as Reidys B52s and the ubiquitous gold Bomber.

Barra will also react well to medium and large soft plastic lures at times. I’ve had good success fishing the pre-rigged Squidgey Slickrigs in the Dropbear and Chartreuse patterns, as well as five and seven inch Berkley Gulp! Jerkshads in brighter colours.
Saratoga and sooty grunter will both respond well to smaller lures, closer in size to what you’d use for bass or estuary perch down south. Both species react well to surface lures such as floating stickbaits, poppers and fizzers, so make sure to pack a selection of each as well as several small to mid-sized diving minnows. 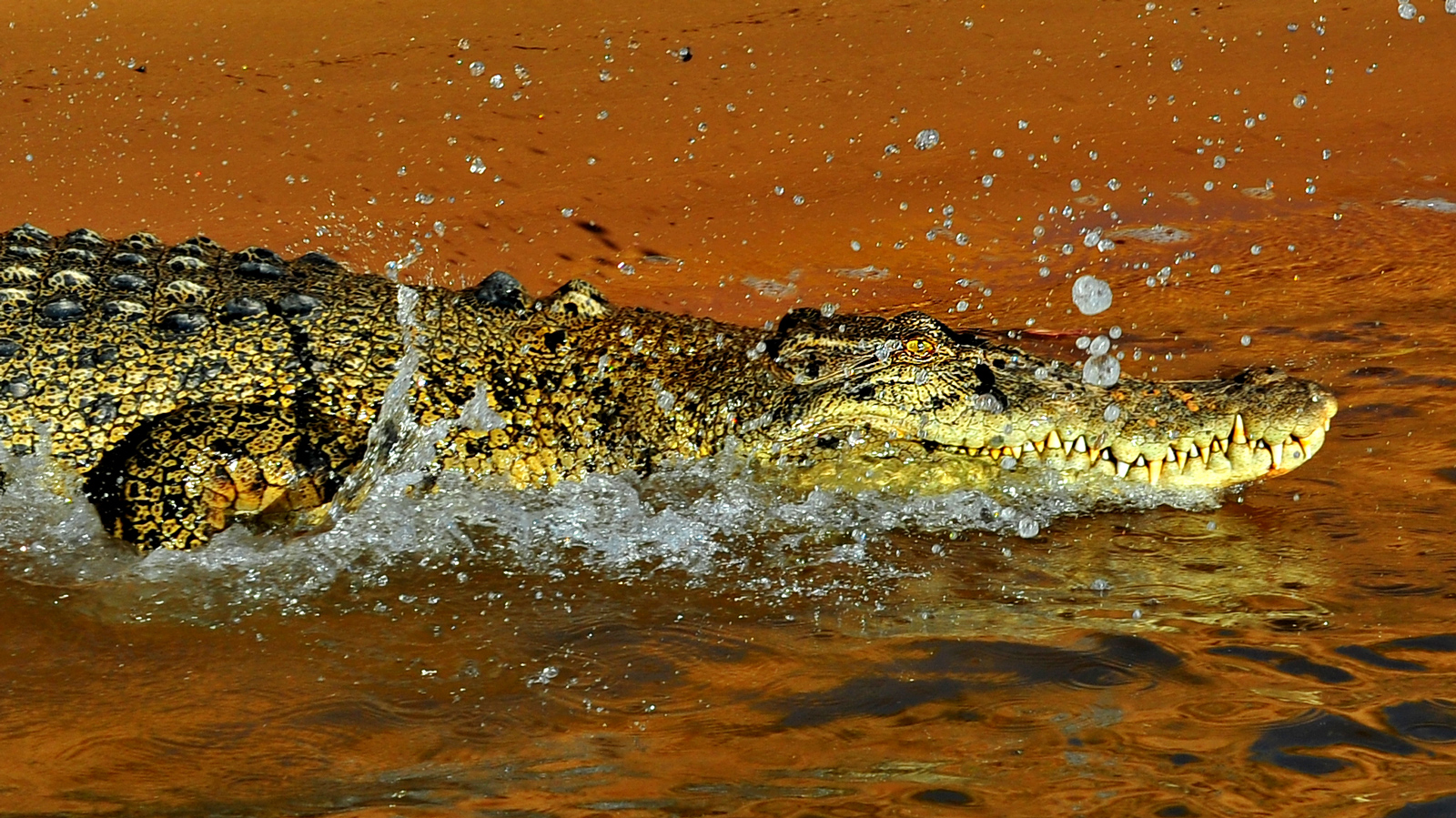 When the Hunter Becomes the Hunted

Talk to locals and other tourists to find out if there’s a croc population in any waterway you’re thinking of fishing, and if there is you should consider only fishing it from a boat. Don’t wade out into the water under any circumstances if you do end up fishing from the bank.

The heat and humidity can get intense when fishing up north during the heat of the day. Make sure you pack several litres of water and wear a hat, sunglasses and protective clothing.

Mosquitoes and other biting bugs can inhabit some freshwater systems in plague proportions. Make sure that you invest in a tube of Bushman brand insect repellant cream (the 80% DEET variety) this stuff tingles as it goes on your skin, and probably isn’t great to use long term, but it works and the bugs won’t come anywhere near you when you’re wearing it.