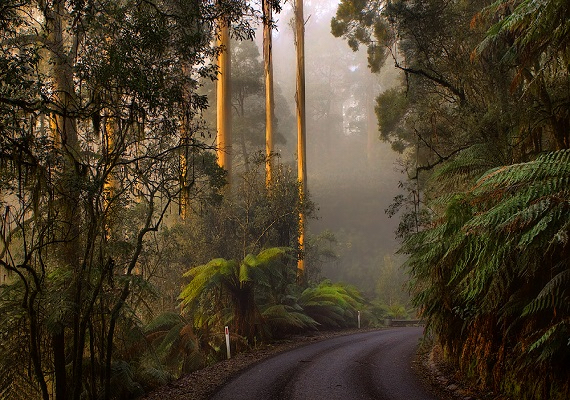 The Otways are a Vicco state treasure and a summertime rite of passage down the Great Ocean Road for Melbournian 4WDers.

A 185-hectare swathe of bushland within the Otway Ranges lies under the protectorate of the Great Otway National Park. It’s situated within the Barwon South West region of Victoria, about 160 clicks to the southwest of Melbourne.

The park’s home to a fistful of bellringer campsites and an arvo drive through the densely wooded network of tracks is a surefire fix for whatsoever ails you.

If you don’t mind mingling with the tour groups and international visitors ogling the sights along the Great Ocean Road, you owe it to yourself to venture out from the park’s bounds to cop an eyeful of this bonafide wonder of the world.

THE OTWAYS DRIVE is one of Victoria great scenic drives. The 240km journey follows mostly unsealed roads and dirt tracks, taking in the best of the Otways.

Kicking off at Anglesea, the first 100km winds through unsealed tracks to Beech Forest, skirting several impressive waterfalls en route. The track then leads to the spectacular Triplet Falls, on an hour-long loop through ancient rainforest and on to Apollo Bay, Cape Otway and back to Anglesea.

THE GREAT OCEAN ROAD is the heritage-listed strip of bitumen that stretches from Torquay to Allansford along the Vicco coastline. This is a legit national classic that’s bound by some of the most striking coastal landscapes you’ll lock eyes upon anywhere.

While not a 4WD adventure as such, the vibrant natural scenes more than makes up for the lack of low-range action and your camera will absolutely get a workout.

Campsites are open and closed seasonally and must always be booked in advance – head online to the Victorian Parks and Wildlife site for more information and to make bookings.

FUEL is available at Torquay, Lorne and Melbourne.

MORE INFO is available at www.parkweb.vic.gov.au