Life on the road shouldn’t mean doing without the finer things!

For me, waking up and turning on a coffee machine to kick-start the day is the first thing I do. Every morning is the same thing, and let me tell you I need it!

By no means am I a coffee snob… I just like a good coffee. Freshly ground and admittedly I like it black.

In the country, take away coffee quality can be hit and miss, and most of the time the drive from the bush back to civilisation is just too long to justify.

From the get go, I said I was going to build a system that allowed me to take a coffee machine with me. As I have always said, it was in my head even before I bought the 200 Series.

Now I didn’t want just a pod machine, and I figured if I was going to get my wife to join me at some stage again then it was going to have to be a good machine. 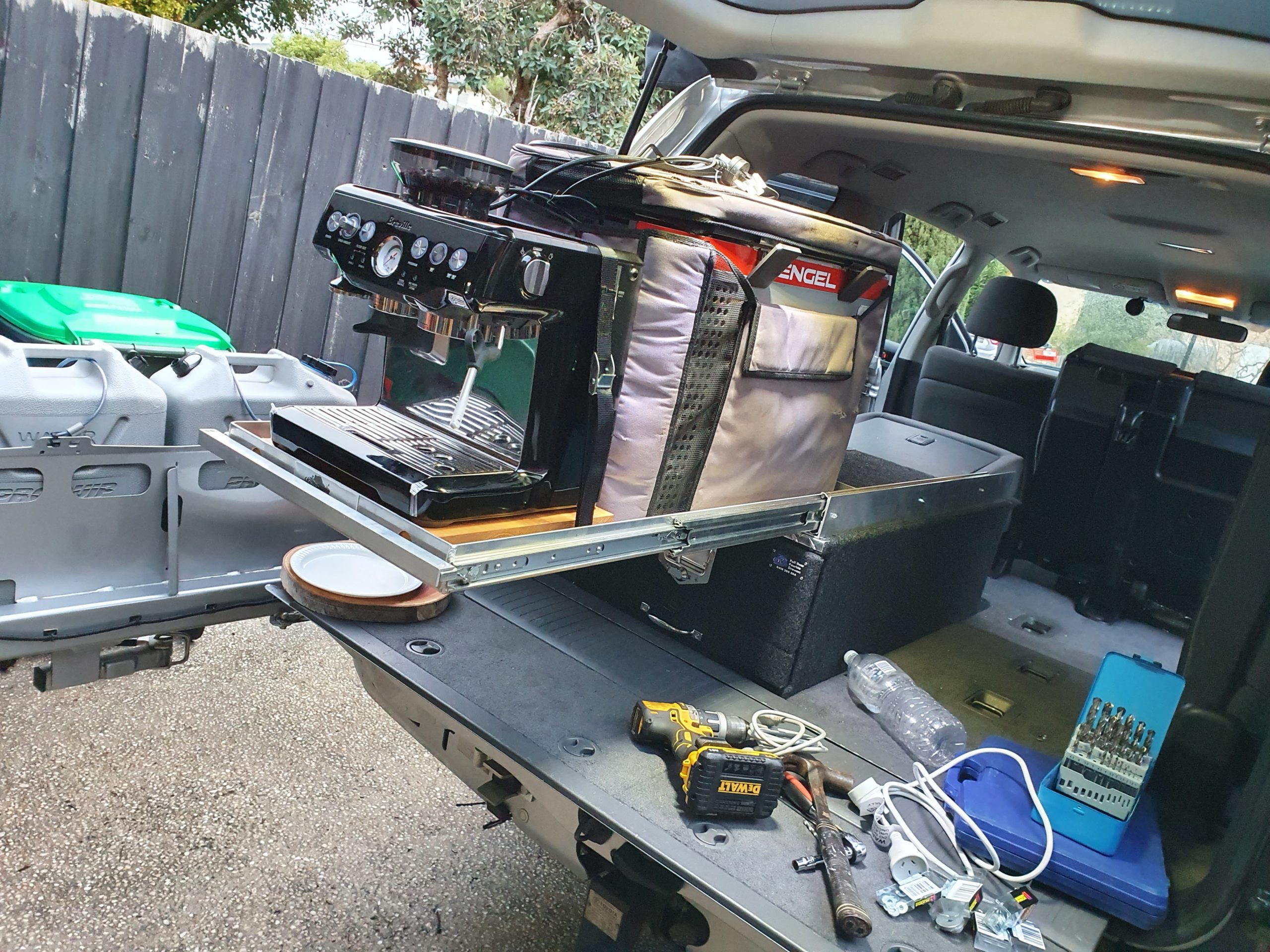 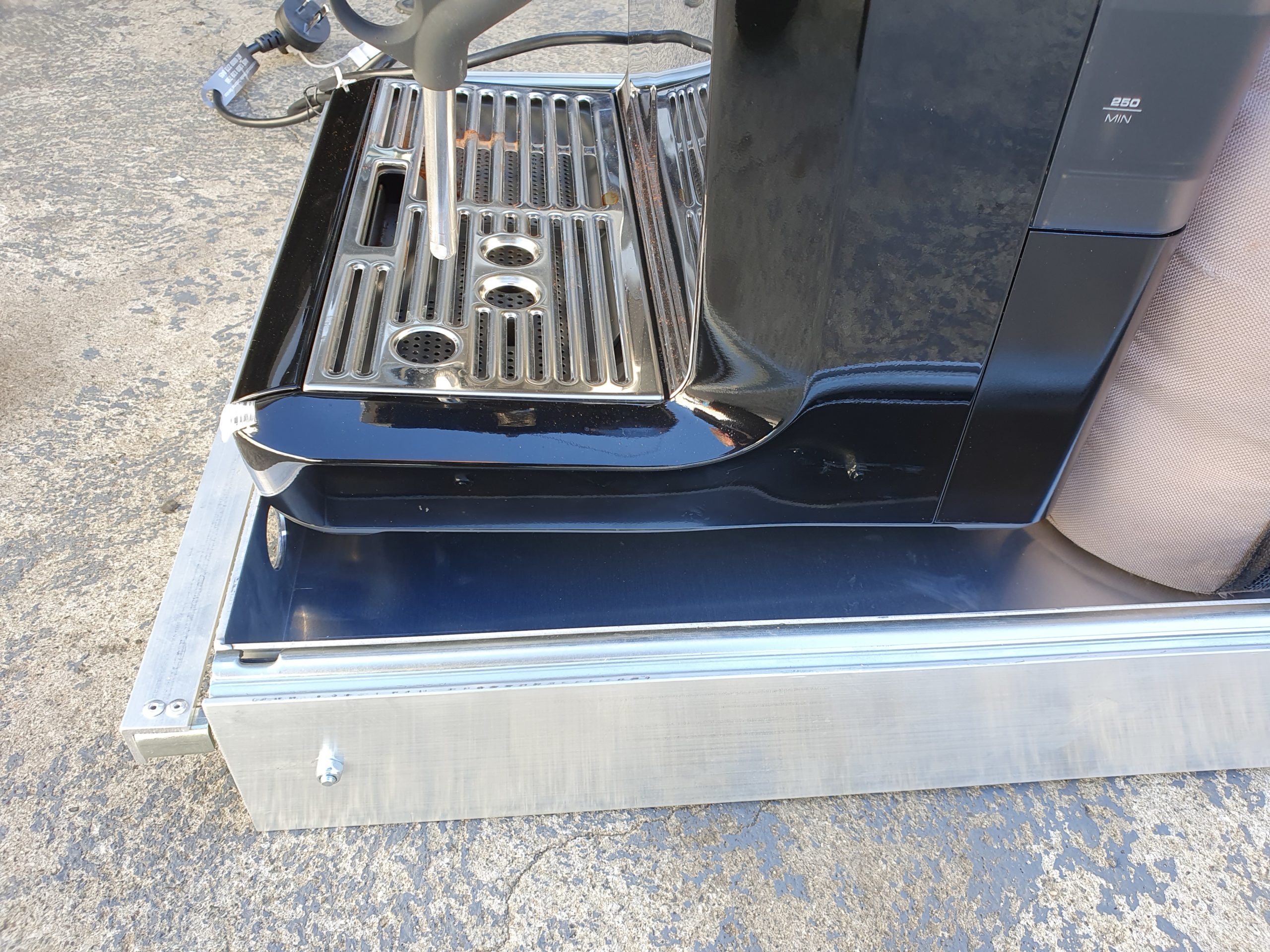 I set out with this picture in mind of a battery system with two batteries ran by a REDARC DCDC charger with a REDARC inverter connected.

When getting started on the build, keeping the middle row of passenger seats in the 200 Series intact was a non-negotiable, as I’ve got three kids.

I contracted Dion Fox from Full Boar Fourbie Drawers, whom I consider to be the best in the business to build me a custom single draw system.

I told him what I wanted and roughly drew it out. He was surprised but also up for the challenge.

It didn’t take him long to build me a system that was capable of housing two batteries, one at the rear of the drawer in a void, and the other on the side of the system under the wing.

My challenge was then to figure out where I could mount the inverter. I ended up fitting it up and hardwiring it in place at the top of the left rear window on the plastic trim.

Now fitting up the fridge and then the Breville Barista Express Coffee machine was the next step.

I marked it all out on top of the drawer, and concluded that everything would just fit the way it was intended. I then got in touch with the guys at Dunn Watson, as they often build custom stuff.

The process was easy these guys are true professionals. I told them what I wanted to do, and together we worked out the measurements.

The slide was delivered to match the exact specs we had discussed and it fitted perfectly in the vehicle.

On a Sunday night I dropped over my mate Brett’s place, and together we made up a piece of wood with some little feet to keep the wood from water if any was spilt. This was to space up the coffee machine so we could access the lower compartment.

Within an hour it was all fitted, and somehow this vision I’d had in my head was now a reality in the back of my 200 Series Landcruiser.

The fridge slide is perfect. It’s very user friendly and pulls out to the beginning of the pull out table when the drawer system is fully extended. If I want to, I can also just pull out the slide to a halfway point, or just leave it all in place and use the machine there.

In order to make everything fit just the way I wanted, I needed to make one small compromise. The lid of the fridge can’t be fully opened in place, so I have to slide the fridge out to remove the inside basket.

To be honest, this was a very small price to pay in order to make a system like this work, which has allowed me to keep the one rear seat and have a coffee machine fitted in place. I love the new setup and I am very happy that my vision is now a reality.