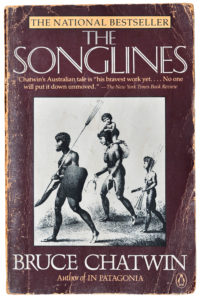 No other book about Australia has ever so captured my imagination, as an outsider, as this unique novel.

Part travel diary, part sketches, proverbs and roadside thoughts from the battered old Moleskin notebook that Chatwin carried around religiously, it opens up by describing an Alice Springs that has not changed since 1987: “In Alice Springs – a grid of scorching streets where men in long white socks were forever getting in and out of Land Cruisers…”
Bruce travels the outback trying to find in the aboriginal songlines a true and real justification for his theory of man
as essentially nomadic, a state of affairs
that leads to the daily torture of life when we are locked down to the soil,or merely to a room, as Pascal intimated.
The map the aboriginals painted was drawn in music, and their tie to the land was far more solid, and meaningful, than all the property laws in the world.
For Chatwin, the ‘question of questions’ was the true nature of human restlessness.
Some say he was wrong, or that his facts were dubious. But I like to think of The Songlines as no less than a new mythology of man’s struggle, a perfect explanation for our ills, and just maybe, the cure is nothing more than the simple act of wandering. 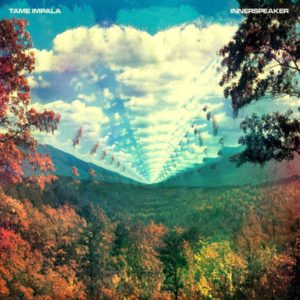 There isn’t a road trip that goes by in my life without something from this band making it onto the radio within the first day or two.

Innerspeaker is the band’s debut LP and it quickly cemented these scraggly kids from Perth who didn’t wear shoes, or look at the crowd, when they played, as the best rock artists working in Australia today. I’d venture much further, but they’re still young and who knows what the future holds.
Lead singer and minor force of nature Kevin Parker is responsible for the band’s unique sound. Partly it’s his twisted Paul-McCartney-if-he-was-from-South-Africa voice, and partly it’s his singular vision tying the whole thing together from end to end.
These songs spiral back into themselves like Joan Didion’s writing, an aural ouroborus.
Needless to say, it’s the perfect driving album, just accessible enough that you’ll be singing along after a few listens, but deep enough to keep you coming back for more.
This is pop music at its most visceral – a kind of pure emotional journey through the mind of a tortured artist who really just thinks that life is a bit simpler inside his own head than out there with everyone, and everything else.
Some of the tracks on the album are so meticulously crafted that I’m reminded of Floyd’s highest points in the studio, and some of it is so loose, so rambling, yet held together so well that I feel like I’m listening to something more like a lost live tape from Led Zeppelin, where the guys are just freely zipping through interplanetary space but everything’s staying in one piece…just barely, around a molten core of thumping guitars.